THERE WILL BE ‘NO’ ON SITE REGISTRATION!

Field
• Limited to first 300 competitors.
• Transition Time & Day of Registration will be evaluated as per COVID guidelines.

The Run “Start/Finish Banner” Tavern Parking Lot at 67th Street, goes south on West Drive to Center Drive to East Drive. Turn West on Terrace Drive and head back to West Drive to Transition Area. Runners must stay to the left side of the runner’s lane as indicated by the “Runners Stay Left” signs affixed large cones along the run course.

GET RUN MAP
GET TRANSITION MAP

The bike course (12 mi.) consists of two (6 mile) loops of Central Park in a counter-clockwise direction.

Bikers must stay in the middle and right lanes at ALL times and may not enter the runners (left) lane under ANY circumstances.

After the bike, the final run begins from the same back end of the transition. The 2nd Run is the same as the first. The finish is the same “Start/Finish” banner.

New Race Location – Central Park Tavern on the Green
• Central Park is closed to all vehicular traffic on weekends. Parking can be found outside the Park on the East and West Sides. The closest Park entrance to the start of the race is at 66th Street and Central Park West. (view map)

Bib Numbers
Approximately 3 days before the event you will receive an email notifying you of your race bib number. If you arrive at check-in and do not know your number in advance, you may look it up on the alphabetical list posted near the registration tables. Please do not get in line for check-in if you do not know your race number and have photo ID.

Packet Pick-Up and Late Registration
Only competitors may pick up their numbers in person with photo ID. You may not pick up a race packet for anyone else.

Refreshments
Due to Covid-19, there will be no refreshments after the race.

Lane Restrictions
Cyclists must stay out of recreation/joggers lane at ALL times. A four-minute penalty will be assessed if you enter the restricted joggers lane during any part of the course. This is a safety measure and will be strictly enforced. Police will issue tickets to offenders.

Drafting Rules
Riding in a pack and drafting is a serious violation. A distance of three bike lengths from the bike in front of you must always be maintained. You may not be closer than this distance for any period exceeding 15 seconds. If you are, you will be assessed a 2-minute penalty for each infraction.

If another competitor is drafting you, yell at him to stop drafting. If you wish to file an official complaint regarding drafters, you must record their race number. A competitor who has three drafting reports filed by other competitors will automatically receive a 2-minute penalty.

Central Park Alert
The course is only closed to cars (except for official vehicles) but NOT to pedestrians, joggers, cyclists, skaters, etc. While biking, competitors must be aware and considerate of non-competitors who will also be sharing the Park roads with competitors. You do not have right of way or priority over other users of Central Park because you are competing in this event.
• Contestants must follow instructions of race officials and public authorities and must obey all traffic laws.
• Contestants must ride in designated lanes at all times.

Race Violations & Penalties
Each of the following actions will result in a 2-minute penalty:
• Riding in/out of transition area.
• Entering/exiting transition area under, over, or between barriers.
• Bicycle not on assigned bike rack or racked incorrectly.
• Race # not visible at ALL times while competing or in the transition area.
• Unsecured helmet chin strap leaving or entering the transition area.
• Drafting or “pack riding” violation.
• Accepting outside assistance or being paced by non-competitor. 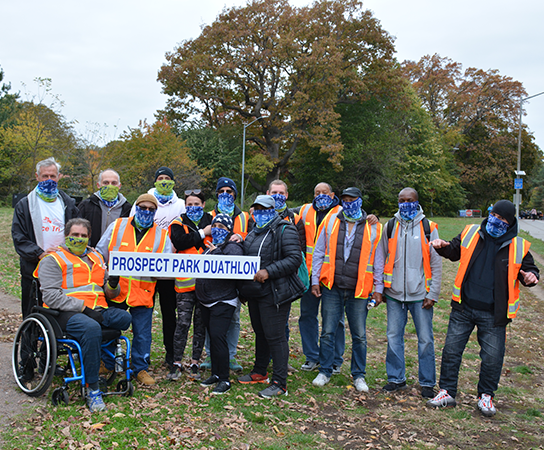